The Meaning of Truth 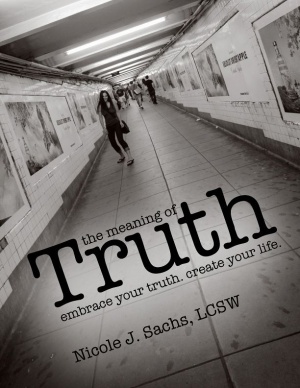 embrace your truth. create your life.

Nicole J. Sachs, LCSW is a Sarno therapist practicing in Delaware, and is also a former patient of Dr. Sarno's. Her TMS journey began at age 19 during her freshman year of college, when she developed acute lower back pain that orthopedic surgeons told her required major surgery. Dr. John E. Sarno told her otherwise, diagnosing her with TMS. After successfully completing Dr. Sarno's program, Nicole participated in Dr. Sarno's Alumni Panels. As a psychotherapist, Nicole often received referrals from Dr. Sarno, and still treats many of these clients today. (Source)

Nicole shared her story in a 48 minute interview with Forest in March 2013. Watch the full interview below:

Online Discussions about The Meaning of Truth

This book is a frequent topic of discussion on the Peer Network's mindbody syndrome discussion forum. Below are a couple discussion threads about the book.

View all threads tagged with “The Meaning of Truth”

Podcasts about The Meaning of Truth, featuring Nicole Sachs

Beginning July 29, 2014 and concluding on October 14, 2014 the Peer Network's weekly podcast discussed The Meaning of Truth, with Nicole Sachs on the line as a co-host. Audio recordings of these podcasts as well as links to official threads containing chapter by chapter discussions of the book are below.

An Introduction to The Meaning of Truth - July 29, 2014
Official Thread

Reviews from the Peer Network

Buying The Meaning of Truth

The Meaning of Truth is currently available for purchase at Amazon.com in paperback format and Kindle format. It is also available through Barnes & Noble as a NOOK e-book.