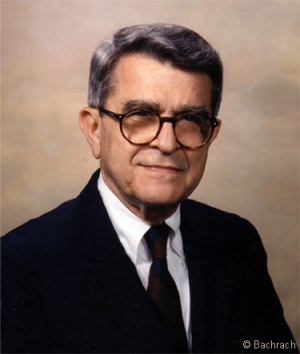 John E. Sarno, MD is a retired American physician and former professor of Rehabilitation Medicine at New York University Medical Center. He is most known for discovering “TMS” (Tension Myositis Syndrome, also known as Tension Myoneural Syndrome). His work in the field of mindbody medicine has been rejected by the medical community and the general population; however, of the 11,000 plus patients he has treated, Dr. Sarno estimates he has cured at least 90% of them using his TMS approach. Dr. Sarno has written four books on TMS, and has also trained many physicians and therapists on how to diagnose and treat patients with TMS, including his successor Ira Rashbaum, MD, as well as psychologist Arlene Feinblatt, PhD who originated the psychological program for Dr. Sarno in 1973 [1], psychologist Frances Sommer Anderson, PhD, SEP, physician David Schechter, MD and psychiatrist Peter Zafirides, MD.

Dr. Sarno earned his medical degree from Columbia University's College of Physicians and Surgeons in 1950. After a year-long internship at USPHS Hospital in Staten Island, he went into family practice in Fishkill, New York from 1951 - 1960. During this time, he also co-founded the Mid-Hudson Medical Group in 1955, and served as its director until 1960. From 1960 to 1961, Sarno completed his residency in pediatric medicine at Columbia-Presbyterian Medical Center, after which he completed a two-year clinical fellowship at the Institute of Physical Medicine and Rehabilitation at New York University Medical Center, which concluded in 1963. From 1963 to 1965 Sarno served as the Clinical Director of New York State Rehabilitation Hospital in West Haverstraw. In 1965, Dr. Sarno joined the staff of the Howard A. Rusk Institute of Rehabilitation Medicine at New York University Medical Center as the director of outpatient services, and that same year became board certified in Rehabilitation Medicine. He remained as director for ten years.During his time at New York University, Dr. Sarno was also a Professor of Rehabilitation Medicine at the New York University School of Medicine, and was an attending physician at the Rusk Institute. He also operated a private practice through the Rusk Institute starting in 1965, which he continued up until his retirement in April of 2012 [2].

Dr. Sarno began his career using the standard treatment protocols for patients with chronic neck, shoulder, and back pain. But in the early 1970s, he noted that his patients simply were not improving, and began to doubt whether the conventional diagnoses and treatments for these conditions applied to these patients:

“Conventional medical training had taught me that these pains were primarily due to a variety of structural abnormalities of the spine...Pain in the legs or arms was presumed due to compression (pinching) of nerves. However, it was not at all clear how these abnormalities actually produced the pain.”

(From the Introduction of Healing Back Pain, pp. viii - ix)

Upon closer examination, Dr. Sarno discovered that 88% of his patients had a history of tension or migraine headaches, heartburn, hiatus or hiatal hernia, irritable bowel syndrome, asthma, eczema, and a variety of other disorders that were commonly thought to be caused by tension. Sarno also noticed that most of these patients tended to be hardworking, conscientious, compulsive, and perfectionist; traits that he thought might lead to unconscious rage. Building off of this information, Dr. Sarno developed the theory that repressed rage and emotions can cause physical manifestations, such as pain, that serve to distract the conscious mind from recognizing feelings it may find unpleasant. He named this condition Tension Myositis Syndrome (TMS), as at the time he thought that the only tissue involved in the physiology of TMS was muscle (the term “myositis” refers to the inflammation of muscles). Over time however, Sarno discovered that the syndrome he called TMS also involves nerve and tendon tissue, perhaps nerve tissue even more so than muscle tissue. This discovery, as he said during his interview on Larry King Live, meant that TMS covered a wide range of chronic symptoms. As the term “TMS” had become well-known at this point, however, Dr. Sarno did not completely rename the syndrome, instead replacing only the middle term “myositis” with “myoneural” to more accurately reflect the physiological aspect of the syndrome. But, as he stated during his interview with Larry King, “If I were putting a name on it now, it would be somewhat different” [3].

Dr. Sarno's work in the field of mindbody medicine has been the source of much controversy within the medical community, as well as the general population [4]. However, of the 11,000 plus patients he has treated since the 1970s, when he first developed TMS, Dr. Sarno estimates that he's cured over 90% using his TMS approach. This does not take into consideration the many others he has reached indirectly through his books and his commitment to his work, despite the controversy and rejection that ensued.

Sarno's books describe two follow-up surveys of his TMS patients. The first in 1982 interviewed 177 patients selected randomly from those Sarno treated in the preceding three years. 76% stated that they were leading normal and effectively pain-free lives. A second follow-up study in 1987 restricted the population surveyed to those with herniated discs identified on CT-scans, and 88% of the 109 randomly selected patients stated that they were free of pain one to three years after TMS treatment.[5]. More recently, in 2007, Dr. David Schechter, a medical doctor and one of Dr. Sarno's former students and research assistants, published a peer-reviewed study of TMS treatment showing a 54% reduction in the average pain intensity scores for a cohort of 51 chronic back pain patients, whose average pain duration before the study was 9 years. In terms of statistical significance and success rate, the study outperformed similar studies of other psychological interventions for chronic back pain.[6]

Dr. Sarno has published four books about TMS: Mind Over Back Pain, Healing Back Pain, The Mindbody Prescription, and The Divided Mind. In addition to these four publications, Dr. Sarno has also authored several journal articles, such as and Psychosomatic avoidance of conflict in back pain, published in the Journal of the American Academy of Psychoanalysis, and Psychosomatic concepts in chronic pain, coauthored by Dr. Ira Rashbaum [7].

Mind Over Back Pain (1982)
Mind over Back Pain is Dr. Sarno's first book on TMS. In it, he outlines the theory of TMS, and writes about his experience treating patients successfully using his TMS approach.


The Mindbody Prescription: Healing the Body, Healing the Pain (1998)
Dr. Sarno's third book, The Mindbody Prescription , adds information that came to light during his clinical practice. This book goes into more detail about the psychology thought to cause the chronic pain syndromes. Unlike his previous two books, here Dr. Sarno identifies “TMS equivalents” -- the many other chronic health issues that can occur for the same reason as TMS.


The Divided Mind: The Epidemic of Mindbody Disorders (2006)
The Divided Mind is Dr. Sarno's most recent publication to date. In it, Dr. Sarno continues to add some information to the theory he developed more than 30 years ago, building off of the content of his previous three books. Unlike these three books, however, The Divied Mind also features chapters by six other TMS physicians, and addresses the entire spectrum of psychosomatic disorders and the history of psychosomatic medicine.

Main Article: The 20/20 segment on John Sarno and TMS

In 1999, ABC News's television program 20/20 did a thirteen minute report on Dr. Sarno's work entitled Dr. Sarno's Cure. The report was introduced by Barbara Walters and produced by co-anchor John Stossel. Stossel recounted his own story of suffering from back pain, and how he recovered with Dr. Sarno's help. In addition to an interview between Dr. Sarno and Stossel, the segment also features interviews with six-time Emmy Award winner Janette Barber, who also suffered from TMS, and 3 other TMS sufferers, detailing how Dr. Sarno and TMS played a role in their recoveries. Dr. Sarno's lecture is shown as well. The video can be watched below.

In May of 1999, radio show host Howard Stern interviewed Dr. Sarno on his show. During this twelve minute segment, Stern discusses how he was able to use Sarno's approach to overcome chronic back pain and OCD, curing himself in only a couple weeks. Click here to access the interview.

In August of 1999, Dr. Sarno was a featured guest on CNN's talk show Larry King Live. Joining King and Sarno during this broadcast (which was entitled How Can Chronic Back Pain Be Cured?) was Dr. Patrick O'Leary, a spinal surgeon who revealed during the conversation that he was not opposed to Sarno's mindbody approach. Also part of the broadcast was radio personality Howard Stern, defense attorney Robert Shapiro, and television producer Janette Barber, all three of whom had overcome chronic back pain using Sarno's TMS approach. Click here to read a transcript of the interview.

Dr. Sarno also made an appearance on the Rosie O'Donnell Show. Jeanette Barber, the producer for the show, suffered from debilitating ankle pain. After her doctor told her she had incurable tendonitis, and would never be able to walk again, Jeanette asked the audience of the Rosie O'Donnell show to search for a solution. Of the hundreds of letters the show received, many of them recommended Dr. Sarno's Healing Back Pain. Jeanette read it, attended one of his lectures, and within three weeks was completely cured. Rosie O'Donnell invited Dr. Sarno to appear on her show to thank him personally. [9]

Your Healing Power with Psyche and Soma (2010)

Dr. Sarno was a somewhat frequent guest on this internet radio show, hosted by psychiatrist Frank Murphy. An audio recording of a 2010 interview with Dr. Murphy, Dr. Sarno, and TMS physician John Sklar, MD is available as an mp3 and in other formats.

Senate Hearing before the Committee on Health, Education, and Pensions

On February 14, 2012, John Sarno, MD appeared before the Senate Committee on Health, Education, and Pensions to address 'Pain in America: Exploring Challenges to Relief'. The committee was chaired by Senator Tom Harkin (D-Iowa) who was very supportive of the mind-body connection espoused by Dr. Sarno's treatment approach to pain. In fact Senator Harkin describes his own successful experience with pain relief from reading Dr. Sarno's books. Senator Harkin relates how his niece's chronic pain symptomatology from fibromyalgia resolved after reading Dr. Sarno's books as well.

Among some of Dr. Sarno's famous patients include radio personality Howard Stern, actress Anne Bancroft,[10] 20/20 co-anchor John Stossel, and television writer and producer Janette Barber. All four have praised Sarno and his work highly.[11][12] Howard Stern was so pleased with Dr. Sarno that he added a blurb to the back of Sarno's book, The Mindbody Prescription, in which Stern states, "My life was filled with excruciating back and shoulder pain until I applied Dr. Sarno's principles, and in a matter of weeks my back pain disappeared. I never suffered a single symptom again...I owe Dr. Sarno my life."[12] Stern also dedicated his first book in part to Sarno.[13]

This page uses text from the Wikipedia article about John E. Sarno, used with permission. Wikipedia's policies and guidelines prohibit us from adding certain additional information to their article, so we have added that information to this page.