God Does Not Want You to Be in Pain

By Eric Watson and Walter Oleksy
Published in 2014
Available at Amazon.com in paperback format and Kindle format 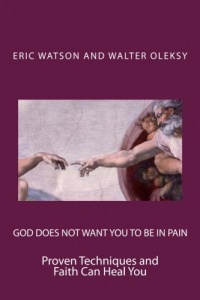 Cover of God Does Not Want You to Be in Pain

Interspersed throughout the book, Walt and Eric add a variety of “healing concepts” that were important in their own recovery. These include not only specific techniques or exercises but also particular mindsets. Some of these concepts are based in other therapies such as Neuro-Linguistic Programming (NLP) and Emotion Freedom Technique (EFT).

Major healing concepts found throughout the book include (but are not limited to):

“People of all faiths or none are welcome here.” -- Introduction

Though both Eric and Walt are Christian (Walt is Catholic; Eric is Baptist), their book focuses not on religion but on spirituality and the underlying theme of belief. However, in writing their individual journeys, both identified their relationship with God as a crucial part of their healing process. As Eric wrote in the introduction, “Walt and I both also added the spiritual element to our healing, asking God to help us become pain-free, and we believe that was a very important part in our healing.”

Born and raised in Georgia, Eric Watson describes himself as “a roofer by trade and, by calling, a Southern preacher” (p. 11, God Does Not Want You to Be in Pain). Eric's TMS manifested as chronic back pain and sciatica, starting when he was fifteen years old and lasting for twenty-five years. Eric overcame these 25 years when he fully believed that not only that his pain was psychological (rather than structural), but that he had control over it and did not have to accept the pain any longer.

Eric is an active and beloved member of the Peer Network's discussion forum, where he goes by the username “Eric "Herbie" Watson” . As of August 2013, Eric has also been moderating the Tuesday night call-in discussion group.

A longtime resident of Chicago, Walter Oleksy is former reporter and editor for the Chicago Tribune and currently works as a freelance writer of both fiction and nonfiction books for all ages. Walt developed TMS, manifesting as back pain, at 82 years old. At the advice of a friend, he read John Sarno's Healing Back Pain, following the twelve daily reminders to reinforce that his pain was psychological, not physical. Walt was able to overcome his back pain by fully accepting that 100% of his pain was from repressed emotions. As he discusses in God Does Not Want You to Be in Pain, he found deep breathing, laughter, and journaling to be particularly helpful in his healing journey.

Like Eric, Walt is also highly active on Peer Network's discussion forum, where he has accumulated the most likes.

God Does Not Want You to Be in Pain is currently available at Amazon.com as a paperback and Kindle (e-book).

Read the first five chapters of God Does Not Want You to Be in Pain for free! Choose your format:

This book is a frequent topic of discussion in the Peer Network's mindbody syndrome discussion forum. Below are a few discussion threads about the book.

Series of podcast appearances with the authors