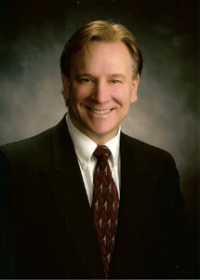 Steven Ray Ozanich is a TMS coach, activist, and author of the 2011 book The Great Pain Deception: Faulty Medical Advice Is Making Us Worse.

Steve's battle with TMS began when he was 14 years old, manifesting as lower back pain that seemingly came out of nowhere. He lived with these symptoms for 27 years until he found relief through Dr. John Sarno's TMS approach.

At 26, Steve was within weeks of getting his bachelor’s degree in engineering, while also working 40 hours a week. At that same time his wife became pregnant with their first child. As Steve shares in his book, he was unaware -- consciously, that is -- of the emotional stress all this placed on him.

Two weeks before the due date, Steve's wife became preeclampsic. Doctors determined it was best that the baby be delivered then, by caesarean section. While performing a spinal block on Steve's wife to prepare for delivery, the anesthesiologist punctured a blood vessel which prevented oxygen from feeling the nerves of her spinal cord. Though the baby was safely delivered, Steve's wife was quickly losing sensation in her legs. Despite his strong efforts to get her the medical care she needed, Steve was unable to get the attention of a doctor to attend to his wife's condition. Due to this negligence, Steve’s wife became permanently paralyzed from the waist down.

The trauma of his wife’s paralysis left Steve with a number of physical problems caused by his repression of his own anger and guilt over the tragedy: “I never stopped to deal with what had happened to us, never took time or effort to discharge the full impact of the trauma – and my tension level rose steadily. A tragedy such as this was much too painful for me to face in real time; the majority of it got repressed so that I was able to cope with the situation. I relegated it to my unconscious and naively forged ahead. This, I would find out later, was not only the worst thing that I could do; it was potentially deadly.”

Steve filed a malpractice lawsuit against the hospital and the doctor who paralyzed his wife. During the lawsuit, which lasted for three years, Steve suffered constant sore throats and swollen neck glands. His back pain grew worse. Doctors could not find a reason for any of these symptoms.

The Onset of More Symptoms
Soon after his father-in-law died from leukemia, Steve developed a constant cough that kept him awake most nights. He feared it was the start of a fatal lung condition, but tests showed there was nothing wrong with his lungs. His back pain became so severe he feared he would become paralyzed, like his wife. Adding to this, he began to suffer bladder pain, and then began to have trouble seeing, which caused him to fear he was going blind. He developed bladder pain. His knees started to give out. His neck froze. As with all his symptoms, tests revealed there was nothing physically wrong.

In an attempt to relieve his chronic back pain, Steve took up golf. But during his first lesson, when he swung the club, he heard a pop in his back. His left leg became partially paralyzed. The pain was so intense, he could hardly breathe. An MRI of his leg and back revealed three herniated discs. The pain sent him back to bed for weeks, and for the next nine months he could not move his left foot and calf or stand on his toes. When he walked, he dragged his left leg.

In addition to his debilitating back pain, Steve started experiencing rapid, jerky eye movements, causing him to fear that he had a brain tumor. Vertigo bursts began and he verged on agoraphobia as he became afraid to drive his car or leave his house. Growing problems in his marriage fueled these and other symptoms. Steve eventually stopped going to doctors, working exclusively with a therapist who had helped golfer Jack Nicholas and former President Gerald Ford overcome their back problems. Even so, Steve felt no relief from his back pain and began to contemplate surgery.

One evening, Steve dragged himself to the wine store his friend owned to buy a bottle of wine. “You look like you’ve been through hell,” the friend said, and gave him a book with an article about Dr. John E. Sarno and his book, Healing Back Pain.

Steve had hoped for a miracle, that Dr. Sarno’s theory that repressed emotions caused his pain would save him. But when he read the first few chapters, he lost faith in it being the answer to his physical problems and tossed it across the room.

Desperate for an alternative to back surgery, Steve found a copy of Mind over Back Pain, the first of Dr. Sarno's TMS books. He began reading the book in the store while on his knees as he was unable to stand. The book gave him new hope so he bought the book, took it home, and saw himself on every page, as if Dr. Sarno had written it about him.

After reading Mind over Back Pain, Steve returned to Healing Back Pain. Tears finally began flowing as he realized how much he had been repressing. All of his unrecognized emotions began surfacing, and the healing began.

Though he was reluctant at first to accept that his pain was caused by having repressed his anger over all the tragedies that happened to him and his wife, Steve gradually began to believe that his repressed rage was what caused his many painful symptoms. He began to accept what he calls “the truth within ourselves.” This led him to get out of bed and begin a regimen of walking, then exercising, and playing golf, despite continued pain. He began to ignore his pain, living in the present moment through mindfulness to forget the past and stop thinking about the future.

He read about TMS and that Dr. Sarno said it is common for pain to strike us because we are angry. But Steve did not consider himself to be an angry person. He viewed himself as always being in control, a serene and peaceful person, not accepting that his pain was from suppressed anger over the tragedies that happened to him and his wife. He accepted some of Dr. Sarno’s theory of repressed emotions, but not fully.

He began to practice the “ignore” philosophy of pain, later telling others in his book, “Never yield to pain. If you do, then you give in to your unconscious motivation for it.” He finally faced and accepted all that had happened to his wife and himself and now understood how he had reacted to life. Now he was moving in real time, no longer living ahead of today. “Mindfulness,” he wrote later, had saved my day… and life.” He said he also drew upon faith to heal him.

Steve now describes TMS pain as being a message of imbalance — self-inflicted distractions from unwanted thoughts and emotions in conflict with how we view or understand ourselves. 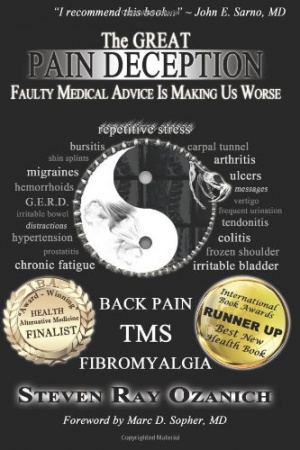 The cover of The Great Pain Deception

After recovering from TMS, Steve spent over ten years researching and writing the TMS book The Great Pain Deception: Faulty Medical Advice is Making Us Worse. Published in 2011, The Great Pain Deception provides a detailed look at TMS and the healing techniques and mindset required to overcome TMS. Steve also shares his own inspirational success story in the book.

The Great Pain Deception has been endorsed by numerous TMS doctors, including Dr. Sarno himself, who wrote: “I recommend this book because the author, Mr. Ozanich, has lived through the experience of having unsuccessful conventional treatments for pain attributed to structural abnormalities of the spine. Once he became aware of and accepted the diagnostic premises of TMS, his pain resolved. His experience highlights the significance and power of knowledge in overcoming psychologically induced symptoms.”

Other endorsements read, “A must read for pain sufferers,” “A complete and insightful review of mindbody causes and cures of TMS,” and “There is great wisdom and clarity here.”

Steve Ozanich and the Peer Network

Steve is an active member of the PPD/TMS Peer Network community, often answering questions and posting new insights into TMS pain and healing on our online discussion forum. In October of 2012, Steve was also a special guest of the PTPN's webinar series, returning in March of 2014 for a special two-hour event.

From August 2013 through March 2013, the Tuesday night discussion group also read and discussed Steve's book. Steve also joined the group for two of these discussions to answer specific questions and add additional insights into his chapters. (Recordings of these discussions can be found here)