Below is my story about how I was cured from RSI after 10 months of chronic and debilitating pain. This information below might literally change your life forever; it did mine. It all began in June 2009. One night I noticed a small twinge of pain in my wrist. At first I didn't think about it much and thought it was because I was on the computer all the time and maybe my wrist was sore. Well… things kept going downhill from there. The pain kept increasing day by day and after about 2 weeks or so I started taking massive amounts of ibuprofen to try and mask the pain while I continued to work. Little did I know at this time how bad the pain was going to become.

In July 09 I walked into a general urgent care facility and they gave a diagnosis of possible carpal tunnel and sent me home with a wrist brace. I wore the wrist brace 24/7 for 7 days as they told me to. At the end of the 7 days my wrist felt even worse. I returned to the urgent care facility and they referred me over to a Orthopedic doctor. The Orthopedic doctor said that I needed physical therapy. So I then began a vigorous strengthening program for the next month. That month came and go and I was still in a lot of pain. I returned to the Orthopedic doctor and he ordered a nerve conduction test. The results were negative. I was in so much pain that when the doctor recommended surgery anyways because it might relieve some pressure on the median nerve, I agreed, and had the endoscopic carpal tunnel surgery. After another month of letting my hand heal from the surgery I noticed the same pain coming back. I was getting very discouraged at this point and was worrying about it almost 24/7. At this point I was spending probably a good 2 hours every night looking online for cures. I purchased 2 different ergonomic mice, but they didn't help. I purchased therapy gloves, special pillows, different computer chairs, rearranged my computer workstation, started drinking only water, and many more things trying to help ease my pain. I started seeing a chiropractor, he said my condition and pain was all due to bad posture and upper back. So for the next two months I saw him 3 days a week. But there was no progress on my pain, in fact it seemed to be getting gradually worse.

On a Saturday, December 09, I still remember the day, I ended up going to the emergency room over the weekend because the pain was so bad. They gave me Oxycodone which I began taking to ease the pain. The problem with this was that the Oxycodone would make me drowsy and it was very hard to keep going to classes and work. Over the next couple months I saw many different doctors. I went to my orthopedic doctor and he wanted to send me to a 2nd physical therapist. At this point I was really frustrated and just left, never to return. I then had an MRI of my upper back and neck done. It showed a few slight protrusions but nothing abnormal. I had an X-ray done of entire right arm and hand and the diagnosis was that my bones were in perfect health. I then saw a Rheumatologist who diagnosed me with slight hypermobility and bad RSI. Something important that I didn't realize until now is that the pain had moved to my hand and my fingers, leaving my wrist. I was having numbness, tingling, and lots of pain in my fingers. At this point I was at my 7th month of chronic pain and could no longer take the pain. I was forced to drop out of school, leave work, and move back home to live with my parents. Thankfully my parents were very supportive through my entire struggle and they insisted that I go to a sports chiropractor. He started doing massage, UVray, and other treatments for RSI. I saw him for about 2 months and made some improvements. My hand was rock solid from scar tissue that had originated from the surgery. He helped break that scar tissue up. However, my hand was still in a lot of pain. The last month, May 2010 was the month that I made my discovery of a book my John. E. Sarno called, The Mindbody Prescription: Healing the Body, Healing the Pain. I read this and found myself on almost every page in the book. The concept in the book literally changed my life forever. It is called TMS, tension myositis syndrome. He describes how our unconscious distracts us with pain because of repressed emotions and stress. The unconscious stops the oxygen flowing to certain parts of the body, in my case, my hand, which then results in pain. The pain is real, not all in your head; however, it is not permanently damaging your body. This made sense to me because whenever I would get a massage I would always feel great leaving the the office, but then the pain would return an hour later. This was because the the massage had moved more blood into my hand, making it feel better. But once I would leave, my unconscious went right back to its distraction. I don't want to go into the concept of TMS in too much detail because the books do that perfectly and they are essential to read if you are experiencing any kind of chronic pain. 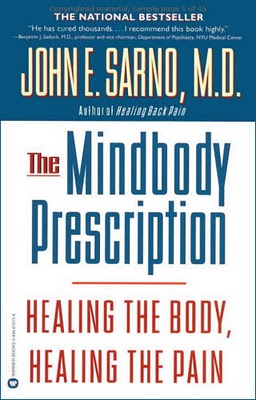 There is a video from 20/20, narrated by John Stossel, who was completely cured by Sarno's method from years of Back Pain. View https://www.tmswiki.org/page/The+20%2F20+segment+on+John+Sarno+and+TMS.

Another great book which I now love is Pain Free for Life by Scott Brady, MD. He gives the term TMS a new name, AOS which stands for Autonomic Overload Syndrome. Brady was completely healed from 7 years of back pain by Sarno and adds a third dimension to the mind-body idea which Sarno discusses. Brady emphasizes that it is a mind-body-spirit connection which we must acknowledge. For me this book was a much easier read than Sarno's book. Sarno has a lot of technical information and scientific data that he presents. Brady simply explains the whole process and actually gives you the steps you need to do every day in order to cure yourself from chronic pain. Sarno is a little vague on actual specifics as far as what to do every day. 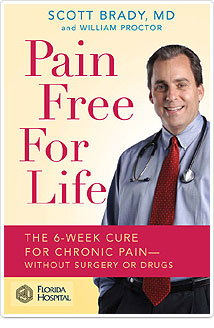 Below is a video interview with Dr. Scott Brady, MD on Good Morning Atlanta.