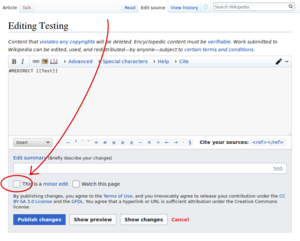 A check to the minor edit box signifies that only superficial differences exist between the current and previous versions. Examples include typographical corrections, formatting and presentational changes, and rearrangements of text without modification of its content. A minor edit is one that the editor believes requires no review and could never be the subject of a dispute. An edit of this kind is marked in its page's revision history with a lower case, bolded "m" character (m).

By contrast, a major edit is one that should be reviewed for its acceptability to all concerned editors. Therefore, any change that affects the meaning of an article is not minor, even if the edit concerns a single word; for example, the addition or removal of "not," which can change the meaning of a sentence, is a major edit.

Because editors may choose to ignore minor edits when reviewing recent changes, the distinction between major and minor edits is significant. Logged-in users might even set their preferences to not display minor edits. If there is any chance that another editor might dispute a change, it is best not to mark the edit as minor.

A good rule of thumb is that edits consisting solely of spelling corrections, formatting changes, or rearrangement of text without modification of content should be flagged as minor edits.

When to mark an edit as a minor edit

When not to mark an edit as a minor edit

Administrators and rollbackers can semi-automatically revert the edits of the last editor of a page; all such rollback reversions are marked as minor by the wiki software. The intended use of the rollback feature is for cases of vandalism, where the act of reverting any vandalism should be considered minor (and can be ignored in the recent changes list).

Additionally, bot accounts usually mark their edits as minor in addition to the "bot" flag.