Marc Sopher
Dr. Marc Sopher practiced medicine in Exeter, New Hampshire from 1990-2011, with the exception of 2004, when he worked at the University of Vermont as team physician for UVM’s intercollegiate athletic squads and as staff physician in the Center for Health and Wellbeing. Because of complicated health issues (unfortunately, not TMS), Dr. Sopher closed his practice in 2011, but continues to offer TMS guidance.

He received his bachelor's degree from Williams College in 1983 graduating with Phi Beta Kappa and cum laude honors. Dr. Sopher received his medical degree from Temple University in 1987, then completed his family practice residency at Middlesex Memorial Hospital’s Family Practice program in Middletown, Connecticut in 1990. From 1997-2003 and again from 2003-2009, Dr. Sopher was the Medical Director of the Synergy Health and Fitness Center in Exeter, NH. The Synergy Health and Fitness Center consisted of a large 40,000 square foot facility that integrated outpatient physical therapy, cardiac rehabilitation and general fitness. While working in his family practice, Dr. Sopher also served as a physician for the Phillips Exeter Academy from 1993-2003. He is a member of several medical associations including the American Academy of Family Practice and the New Hampshire Medical Society. He is board certified in family practice and has served on the editorial board of the American College of Sports Medicine's Health and Fitness Journal. 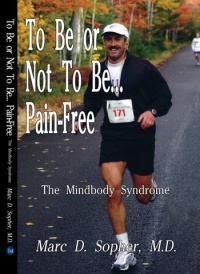 Cover of Dr. Sopher's book To Be or Not to Be...Pain-Free
Dr. Sopher also contributed a chapter to Dr. John Sarno's The Divided Mind, entitled "A Family Doctor's Experience with Mindbody Medicine." Dr. Sopher has also written his own book on TMS called To Be or Not to Be...Pain-Free. In the forward to this book, Dr. Sarno writes Marc Sopher "is a diagnostician, a healer and doctor who knows that we are not merely complicated machines but an exceedingly complicated animal whose personalities and feelings are intimately involved with everything that happens in the body." Dr. Sopher also considers himself an "avid athlete" and has run 16 marathons and the Mt. Washington Road Race.